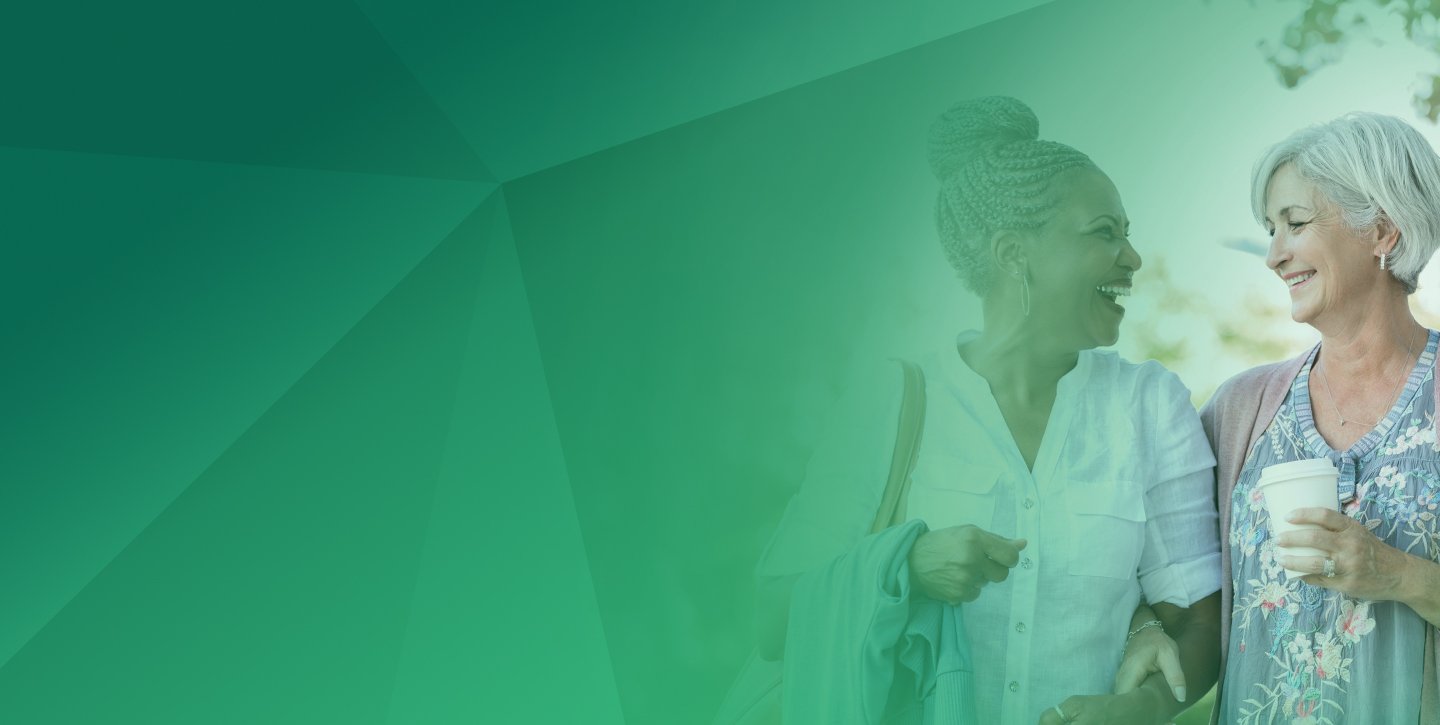 Incontinence is a Global Issue

Proving that you’re not alone — this World Incontinence Week, we are discussing eight different cultures and how they deal with the topic. Join the conversation!

We need to talk about incontinence.

With their European study "Breaking the Silence" HARTMANN demonstrated the social and emotional consequences that incontinence can have on people. At the same time, the data also showed that a more open approach to the subject in society would be of great help to those affected. For the World Incontinence Week, we asked around the world how different societies deal with the topic. Are we going to start talking?

"Ladies, do you get nervous when you laugh or sneeze?" asks a talk show host on local US television. "Bladder weakness is a very common problem," she explains. "But if you don't treat it, it will get worse."
One in ten Americans should feel that this is the right thing to do. According to the National Association for Continence, around 33 million people in the USA suffer from some form of incontinence. Between 75 and 80 per cent of these are female.
From television commercials for muscle stimulation devices to radio shows about surgical procedures for incontinence and articles in the New York Times, incontinence is a common theme throughout American life. And yet no one wants to address it. Incontinence is still a taboo. Many sufferers are too ashamed to talk about their problems. In fact, some women wait up to 20 years before seeking help, says Dr. Emanuel Trabuco, who specializes in urogynecology at the renowned Mayo Clinic in Minnesota.
Once you have gathered the courage, you will come across a variety of treatment options in America: muscle training, acupuncture, yoga, vaginal creams or suppositories, hydrogel or Botox injections and even surgery. But like much in America, especially in medicine, this comes at a not insignificant price. A new device that stimulates the pelvic floor muscles, for example, which has been available over the counter since February, costs 449.95 US dollars (around 411 euros).
The myth that only older women are affected is slowly being dispelled. 24 per cent of women aged 18 to 44 also complain about some form of bladder problems. And even famous football players such as ex-quarterback Tony Romo of the Dallas Cowboys speak openly about it.
In the land of stars and starlets, such actions could help those affected to openly address the issue and seek help. Because there are enough of these in the USA.

Shame and lack of information dominate in Argentina

Urinary incontinence remains a taboo subject in Argentina. Many suffer, particularly women, but few feel comfortable talking openly about it."

Many people believe that incontinence is normal and do not visit their doctor," explains urologist Esteban Nicolás Casabé, a member of the Argentine Society of Urology.
But, he says, that while there is still a lot of ignorance surrounding the topic, there has been some improvement in communication around incontinence. Esteban has found that more women visit his private practice today because of incontinence than ten years ago.
"These fifty- and sixty-year-old patients are women who were already using the Internet ten years ago. They are better informed,“ he comments.

There is a combination of factors in Argentina known to worsen urinary incontinence. At 35 to 40 per cent, the country has a relatively high poverty rate. Many women are obese due to poor nutrition, and birth rates are comparatively high. The lack of knowledge about the disease also means that the right products are not used. Instead, many sufferers resort to using sanitary towels rather than incontinence products specifically designed for the condition.

Incontinence is not a topic commonly discussed on television or radio commercials in Argentina. However, incontinence products are available in most pharmacies and many seniors are covered by PAMI, the public health insurance for pensioners. This insurance company provides some products free of charge.

"If patients were better informed, there would be more inquiries. Normally, women only reveal incontinence symptoms to their doctor after five to ten years," says Juan Ignacio Ramos Suppicich, urologist at the Ramos Mejía public hospital in Buenos Aires.

A lot more needs to be done to break the taboo around urinary incontinence in Argentina.

Up to six million people in the UK of all ages are affected by urinary incontinence, according to the NHS. Sufferers often avoid visits to the doctor and instead try to manage their condition on their own, such as restricting their social and physical activities and even resort to reducing their fluid intake. In addition, sufferers often report that incontinence negatively impact their relationships or love life. Another possible consequence is depression.

Again and again, urinary incontinence is mistakenly considered an inevitable consequence of the aging process for which there is no treatment option. Yet, treatment has a positive effect in four out of five people affected. A variety of organizations are working to challenge the taboo; continuously conducting information campaigns to reduce prejudices and encourage people to be more open-minded.

Still a taboo in Europe

As a rule, Europeans living with urinary incontinence do not speak openly about their condition. For many it remains a taboo subject that they can’t talk comfortably about, even with friends and family.

The main reasons for this are shame, worry, embarrassment and uncertainty, as "Breaking the Silence", the Europe-wide survey commissioned by HARTMANN, revealed. In addition, in many cases there is the hope that the bladder weakness will disappear by itself. According to the study, many people affected by urinary incontinence suffer greatly: around 70 per cent stated that it negatively affects their lives.

On the other hand, those who entrust themselves to others with their suffering feel more self-confident, better supported and generally more joyful in life. According to the survey, those affected in Spain are the most open about their condition.

The task of bringing the topic of incontinence out of the taboo zone is a challenge for society as a whole. With the help of education and counselling, those affected can be shown treatment possibilities and ways of managing their condition more effectively. The removal of taboos is likely to make a significant contribution to removing shame and making it easier for those affected to accept their incontinence.

In Spain, it remains a shame

An estimated six million of the approximately 47 million people living in Spain suffer from urinary incontinence. Although this condition can sometimes considerably restrict people’s quality of life, about two thirds of those affected do not mention the issue to their doctor. Shame plays a major role here.

Nevertheless, compared to the rest of Europe, urinary incontinence in Spain is a much less serious taboo. According to the HARTMANN study, only 35 per cent of those surveyed In Spain conceal their suffering from their partner. In the other European countries, the average is 43 per cent. Even within the family circle, Spaniards tend to talk about their suffering.  Only 42 per cent of those affected avoid the topic in Spain, while in the rest of Europe it is a good half.

Since 2019, nurses have been sensitized to this issue within the framework of an official training program. The aim is to enable them to better recognize hidden cases of incontinence and initiate appropriate therapies.

In Finland, several symptoms put a particular strain on sufferers

Urinary incontinence can cause various side effects that are perceived as disturbing or stressful. The most widespread among sufferers in Finland is urge incontinence - almost eight percent of those affected with incontinence are surprised by the urge to urinate and either do not make it to the toilet or only just make it.

This is one of the findings of the large-scale FINNO survey, in which scientists asked people affected about the most unpleasant consequences of their urinary incontinence. According to the survey, 6.5 per cent of those questioned named stress incontinence, in which stress such as coughing, exercising or laughing leads to involuntary loss of urine. For six per cent, nocturia - sleep interruption due to the urge to urinate - is a disturbing symptom. Post-micturition dribbling, also known as droplet incontinence, is described as unpleasant by 5.8 per cent of those surveyed.

An old taboo begins to crumble in China

In China, incontinence is considered a taboo subject. However, the few official figures show that incontinence is indeed a widespread problem. In 2011, the Chinese Medical Association found that 18.9 per cent of Chinese women suffer from incontinence. Experts suspect that the number of unreported cases is much higher. Authors of the magazine "China Women's News" estimate that almost 50 per cent of Chinese women have problems holding their urine. However, only one in ten of them would seek medical treatment. Conversely, this means that hundreds of millions of women in China are left to fend for themselves with their incontinence. And, there are no official figures for men.

"The Chinese are traditionally very reserved when it comes to their health. But when it comes to incontinence, the shame is even greater," explains Tong Jianyong, urologist at the central hospital in the southeast Chinese metropolis of Jinhua.

Even within the family, this problem is rarely addressed, says the urologist. Without medical supervision, incontinence is not diagnosed and the shame of those affected increases every day. "Men, on the other hand, believe incontinence is a natural phenomenon in old age," Tong Jianyong explains.

However, experts have noticed a change: the younger generation is more open, at least when they talk to doctors about their problems. In addition, there are more and more private initiatives aiming to break the taboo. As a result, the market for incontinence products in China has almost tripled since 2012.

Despite open-mindedness, shame is a huge topic in Australia

A commercial on Australian television shows a bucket catching water dripping from a leaking ceiling. A coat hook slips off and a coat falls to the floor. A loose door handle is pulled out of a door. Then a bell-like, friendly female voice sounds out: "You would certainly not accept something like that every day. You would have it fixed. So why should you put up with incontinence when in most cases it can be cured or better managed? Talk to someone about it today. Call the National Continence Hotline..."

Around 5 million Australians - about one in five - have to deal with incontinence. More than half of those affected are over 50 years old, the majority of whom are women. Pregnant women, people who have recently undergone surgery or people with additional health problems also have an increased risk.

The government-funded Continence Foundation of Australia was established in 1989 to provide education and counselling to people affected by incontinence. According to the foundation, incontinence can be treated, brought under control and in many cases even cured.

The foundation operates a hotline, a website and clinics. It organizes conferences and consultative workshops with titles such as "Laugh Without Leaking". A programme on "toilet tactics" is offered for primary schools and parents of bed-wetting children. Incontinence experts have their say on the radio, television programmes and online videos.

In pharmacies and supermarkets incontinence products are displayed openly. The foundation publishes articles on medical advances in the in-house magazine "Bridge" and advises both women and men on exercises for the pelvic floor.